skip to main | skip to sidebar

An Exhibition at the University Art Gallery, Staller Center for the Arts Stony Brook University

Funktified is an exhibition that explores visual manifestations of a funk philosophy rooted in unselfconscious assertions of self, deliberate confusions and challenges to the status quo. Rather than illustrating funk as we’ve come to know it, Funktified seeks to present artists whose work speaks truth to power on its own, bold, intuitive, joyful, in your face, terms. This exhibition features artworks by Maya Freelon Asante, Terry Boddie, Pato Hébert, Tom Hébert, Felicia Megginson, Justin Randolph Thompson, Silke Thoss. Chris Valle, Susan Zurbrigg and is curated by Stephanie Dinkins.

The exhibition is on view in the University Art Gallery, Staller Center for the Arts, Stony Brook University from September 12, 2009 - October 22, 2009.

The 2009 - 2010 University Art Gallery exhibition schedule is made possible by a generous grant from the Paul W. Zuccaire Foundation. Additional funding has been provided by the Friends of Staller Center and Stony Brook University’s FAHSS Research and Interdisciplinary Initiatives Fund.

The artists of Funktified are... 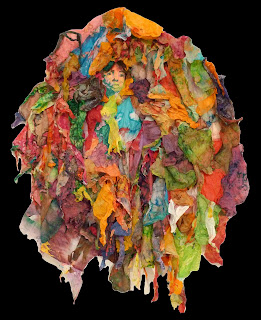 
A few weeks after I started working with tissue paper, Hurricane Katrina began bearing down on the Gulf Coast and I witnessed “water moving color” literally, the power of nature, and the neglect of a nation. The sheer magnitude of the destruction and the remaining marks of flooding struck a direct connection to my artwork.  Over the past four years I have worked with “bleeding” tissue paper, witnessing its deterioration. In and out of water, ripped and pieced back together, thrown, stepped on, forgotten and remembered. The union of the tissue fragments is rooted in my familial quilt‐making heritage and the tradition of preservation and resourcefulness.  Since I haven’t discarded a single sheet, each piece speaks to me as a memory of existence and resilience. Independently, a torn piece of paper seems like a scrap of trash, but once unified with others, the force is overwhelming. Reflecting on the beauty and diversity of the African diaspora, my Tissue Paper Sculptures scale the wall and demand attention. Fragments of familiar faces stare down from above and beam with strength and solidarity.


Terry Boddie works as a photographer and mixed media artist explores the historical, and contemporary aspects of memory and migration and globalization. The images often blur the distinctions between photography, drawing and painting.  Recently his work was exhibited in KREYOL Factory at the Parc La Villette in Paris, France and in the show Infinite Island, Contemporary Caribbean Art at the Brooklyn Museum. His work has also been exhibited at the Smithsonian, The Studio Museum in Harlem, the Bronx Museum of the Arts, and the Philadelphia Museum among other venues.  He is on the Artist Advisory Committee of the New York Foundation of the Arts and the Artist Advisory Board of En Foco. Terry Boddie received a 2009 Fellowship from the New Jersey State Council on the Arts. He lives and works in West Orange, NJ. 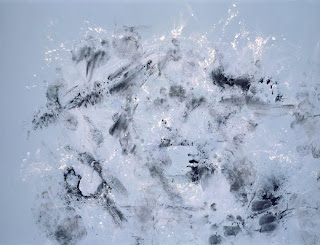 Once I Found My Hips (pictured),


Patrick "Pato" Hebert is an interdisciplinary artist, educator and cultural worker based in Los Angeles. His work explores the aesthetics, ethics and poetics of interconnectedness.  He utilizes photography, installation, sculpture, light, temporality and graphic design.  He is especially interested in the spirit of social topographies and spatial dynamics.  He currently teaches in the Photography and Imaging Department at Art Center College of Design. 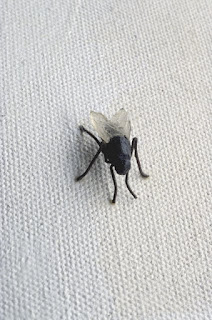 Tom Hebert has had numerous one person shows in New England, and has exhibited at O.K. Harris Works of Art, and at Exit Art, both in New York City.  His work has been included in many group exhibitions in the United States and in Germany. He is the recipient of an Individual Artist Grant in Painting from the Pollock-Krasner Foundation (NYC), and of three Fellowship Awards from the Connecticut Commission on the Arts.  He was also an Artist in Residence at Gesamthochschule Universitat in Kassel, Germany.  His work is included in a number of collections including those of the Stefan Stux gallery of New York City, the Vero Beach Museum of Art in Florida, the Mobil Oil Corporation, and the Aetna Insurance Company. 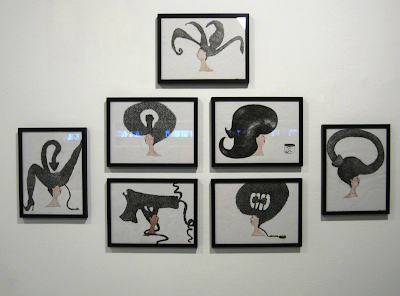 
These drawings take on notions of beauty, sexuality, social identity, and the sundry other "mythologies" that get attached to and entangled in a woman's hair. How a woman wears her hair is often viewed as a reflection of how she sees herself and--in turn--how the world at large receives her. Humor is often a starting point for dialogue, and it is my hope that these drawings will spark conversations about societal tropes of the other and the role hair often plays (rightly or wrongly) in these observations. 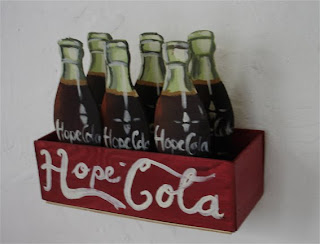 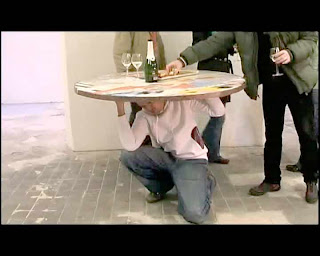 
My work investigates crossroads between ancient Italian references and those of historic and contemporary African-American culture. This mix along with sound works that shift the cultural context of famous songs through reinterpretation results in a funktified vision of abstractly linked situations and an ancient roman influenced hip-hop culture.

Table is a performance based video that investigates the idea of servitude in the context of art and the elite. The performance is the simple action of holding up a faux marble inlay tabletop. During the performance, the weight of the tabletop, supporting the appetizers and champagne, crushes the figure that holds it up. This re-visitation of servitude and its social significance within an elite art context is meant to underline historic continuum. The piece ends when the table collapses upon its support at which point a voiceover of a music critics interpretation of the piece is heard.


In his current work, Chris Valle transposes  images of pop culture over re-created Italian altar paintings from the 15-16th century, using the symbolic power of these religious images to allude to how pop images have now taken on religious status.  He paints these images delivered from television transparently, allowing the original altar painting to show through, making it impossible to see one without the other. The resulting dialogue between the meaning of the original with the contemporary pop image on top of it deconstructs the quasi religious use of pop images in a consumer society. 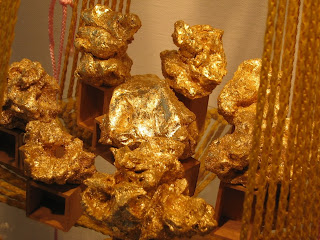 
My work is a continued investigation into the complex language of abstraction. It is the puzzle piecing, analytical act of “finding” a painting, while also referencing body movements and gesture, eliciting the sensual/senses through color, nostalgia and memory. It is the evidence of exploratory thinking, the search, and even the struggle. Recent works have thick, lavish surfaces.  They combine painterly negotiations of space with an almost fashion-like adornment of gilded and sequined embellishment. I seek to redress the pejorative and dismissive connotations associated with the “decorative”.  This work is a suggestive nod to the Pattern and Decoration movement and its conscious inclusion of global aesthetics and folk traditions. As an Interracial-African American, I am also inspired to assert a painterly adaptation of the “free styling” “call and response” process often utilized by musicians and writers.   I find the language of abstraction a true extension of this practice.

Posted by Stephanie at 1:54 PM No comments: